NOTES (2017) is a 52-channel LCD screen audio-visual installation made up of over 1,700 autobiographical “notes”: word plays, neologisms, and onomatopoeia handwritten by the artist on an almost daily basis from one year after the global financial crisis in 2008 until 2014 and 6 years of economic uncertainty that inspired this effort of redemption. 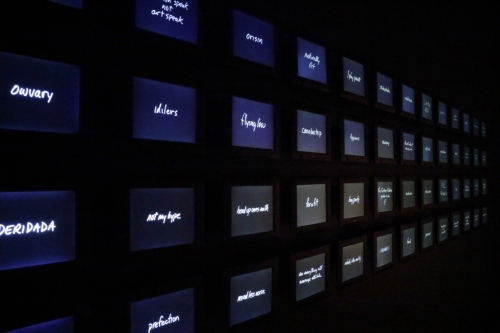 The texts from NOTES are converted to jpeg image and are distributed equally throughout 52 digital LCD screens metaphorically representing the weeks of a year. The screens are arranged in a grid, 4 rows by 13 columns, metaphorically representing a deck of cards. Each LCD screen has its own control processor, mini speakers and motion sensor. The motion sensors in the individual screens activate the NOTES installation as a viewer moves in front of the array. The unfolding content of the installation is present for a few minutes and then disappears into dark silent running ready to continue again from where it has stopped. The randomized start-up of the array of motion sensors, plus the variable duration of the word phrases produces randomized poetic content of nearly infinite combinations and phrasing.

Heimbecker has conceptually organized his NOTES array by borrowing from the rhizomatic philosophy of Deleuze and Guattari “which allows for multiple, non-hierarchical entry and exit points in data representation and interpretation” to create “far-reaching associations that apprehend multiplicity”.

As a final layer of multiplicity, software designed by the artist called Word Music transforms word phrases into musical phrases scored / coded directly from the letter combinations of each unique text. In b-minor a melancholic composition for 2 grand pianos, 2 cellos and a contrabass, is performed with the rhizome NOTES poem across the 52-channel array.

Word Music II is a MaxMSP software designed by the Heimbecker and developed during an artist residency at Agence TOPO in 2015. During this residency Heimbecker produced RIPALIPER (2015) a live audio-visual performance for Sortir l’ecran / Spoken Screen and Metafive (2015) a 5 screen installation.